All of the posts under the "Matthew Kelly" category. 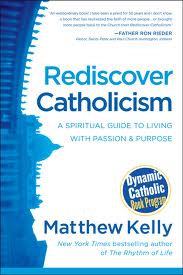 UPDATE: I have since read many other books and have come to realize that Matthew Kelly’s version of Catholicism is not the solution and is barely even Catholic. While I do not believe in removing posts that I have published unless absolutely necessary, I will leave this here so you can see what I thought at this point in my life. I will have the record show that I no longer agree with this review, so keep that in mind when you read it.

I just finished reading Rediscovering Catholicism the other day. So, I thought I’d give my thoughts on it.

The book is quite possibly one of the best books that I have read on Catholicism (UPDATE: No it isn’t, I hadn’t read many good Catholic books at this point in my life, and in hindsight, this book isn’t the best. Not even close.). Matthew Kelly gives a very simple, yet highly informative look on the traditions of our faith, as well as the importance of it. He doesn’t get highly technical, which is fine, because the purpose of the book is for those who have drifted away from the faith, or who haven’t really been that active in the faith, to understand it, and take off with it.

The simplicity of this book gives it incredible power, seeing as it doesn’t matter where you are at in your faith journey, you will be able to readily and easily pick it up. I almost wish that my first Catholic book was this easy, but, who knows if I would have converted.

Matthew Kelly picks up all the important parts of the Catholic prayer life: Mass, Confession, the Rosary, just to name a few. He discusses the importance of each one of these Sacraments or sacramentals and gives reasons for embracing them. As always, he uses good examples to go along with it.

There is a section on talking about his favorite Saints. He gives a pretty decent length bio of each one and talks about why they are important to him. After this he mentions how we each need to pick up a few Saints that admire us and learn about them. After we have finished with this piece, it’s time for us to start praying to them as well as to begin allowing them to inspire us to become Saints or “the-best-version-of-ourselves” as he has coined the term.

I have a list of books that I believe are beneficial to me and help me to grow as a person. I have a “Read Every Year” list as well as a “Read Every 5 Years” list. This book will be going on the first list, but I have reason to believe that realistically I’ll probably get to it more every 5 years. I’ve never been inspired so much and a lot of the posts that I have been discussing lately are because of this.

This is a book for all Catholics, no matter where you are at in your faith journey or how much you practice or don’t practice. I believe you will be inspired regardless of where you fall in the spectrum. I do not think that this is a book you would give to your Protestant or Atheist friend. I say this because you sort of need to be Catholic in order to read it, but, as I always say, if they are willing to read it, then go ahead. I suppose it depends on the situation. I would recommend lending it to fallen-away Catholics if they are willing to read it.

What is nice about this book is that through Matthew Kelly’s Dynamic Catholic program, you can get this book relatively cheap through his website, www.dyanamiccatholic.com. You can even order additional copies for relatively cheap. I purchased about a dozen copies myself as a gift for my Religious Ed Confirmation students, only to find out that at their confirmation, the Archdiocese had decided to give them this book as well. Luckily for me, I have a few people in mind that I can give copies to.

Back on May 5, I saw Matthew Kelly at one of his Passion and Purpose events within the Twin Cities. Yes, I know, that was a while ago. Why am I just now writing about it? Because, I’m lazy and I have had other things I’ve wanted to write about first. Besides, I am busy and I have things going on.

That being said, I wanted to give my thoughts on the event.

I’ve been following Matthew Kelly now for a few years and I must say, I enjoy his style. He isn’t the type that is going to bombard you with Church teaching, or scriptural references or the usual that you hear from a lot of Catholic speakers. What he will bombard you with, is practical uses of Church teaching mixed with humor and story telling.

I’ve wanted to see Matthew Kelly for awhile, in fact, I have a nice long list of Catholic speakers that I want to see. I am a member of Lighthouse Catholic Media’s CD of the Month Program, and I get a different Catholic CD every month. It is usually an inspirational speech discussing some issue on Church teaching. Matthew Kelly has had a few CDs through here and that is how I first heard of him.

Now, I do enjoy being bombarded with Scriptural references, as I feel that it is nice to know where Church teaching is based off of. I also enjoy hearing other references from the Catechism, the Popes, Bishops, the Saints or well, from any other resource that is within Catholicism’s rich teachings. However, the uniqueness of Matthew Kelly’s style will grab your attention and focus you in to becoming the best-version-of-yourself no matter where you are at in your faith journey as well as challenge your personal convictions.

The talk was a ton of fun. It was completely sold out and there were LOTS of people excited to see him. I for some reason didn’t think he was that popular, as I have never heard anyone else talk about him like I do. The price seemed a little steep, but the $38 for each ticket goes toward a good cause.

Matthew Kelly is developing a state of the art religious education program for teenagers who are going through the Sacrament of Confirmation. He shared a statistic that 85% of Catholics leave the Church by the age of 25. The way that the Religious Education programs are for Confirmation are still stuck in the 60’s, 70’s and 80’s. He is developing a program that is guided to be more one on one with the students so that you are engaging them in the areas where they are weak on. I wish that I had this program when I was teaching these last two years. In fact, I had this complaint from a couple of the students where they were either way more advanced than this, or, too far behind and didn’t get it. Having the more one-on-one session would have been able to give the advanced students a more advanced education, and catch up those that were behind. The full $38 of each ticket goes toward developing this program.

The event was very good, in fact, it was similar to listening to 3 or 4 of his CDs back to back to back, but with a little bit more guidance to it. We all took notes on various things that he said. Which of course is nice to go back to those notes. A lot of what he said more or less for me re-enforced his talks that I have heard, although there were things I have picked up that I never noticed before, as well as points he made that really struck home.

Another point that he mentioned was how 92% of things get done within the Church or within a Parish, by about 10% of those parishioners (I can’t recall the numbers anymore, but it was similar to these). It makes you wonder how if the other 90% chipped in as well, how AWESOME would the Church be doing. I’ll get into other posts more deeply about how we should be helping the Church, but for now, I’ll just say that we should be sharing our time, talents and treasures. Meaning 10% of our time, 10% of our talents and 10% of our treasures (money). There are exceptions to the rule, which I will discuss later. God knows your heart more than I do.

I don’t want to give too much away, as I feel he tells himself better than I could ever hope to. I know many times that I have drawn on examples that he has put forth in order to drive my points further home when talking with others. I would highly suggest seeing him if you have the chance and if you can, listen to his talks, they are phenomenal.

If you want more information on Matthew Kelly or his non-profit Dynamic Catholic, click on the links. Consider donating if you happen to feel God calling you to.