Have you ever wanted to know what is going on during the Mass? I have and when the New Translation for the Novus Ordo Mass came out, I asked for a Missal for Christmas, and sure enough, my wife was kind enough to get me one.

I was thinking about it and realized that, yes, I’ve always had a deep reverence for the Mass, but, I’ve noticed something else. Since using a Missal, I actually know what is going on as it tells me what Father should be doing, prayers that he is saying that are inaudible and the like. It is also nice to know that Father is actually saying the correct words throughout the Mass (as some priests out there like to take “creative liberties”) especially during important parts of the Mass in which validity during the consecration is required.

Having the Missal also allows you to gain a deep appreciation for the Mass. In my opinion, every Catholic should have a Missal. It also comes in quite handy when you forget what the words are for the prayer you are saying (especially with the New Translation as old habits die-hard). 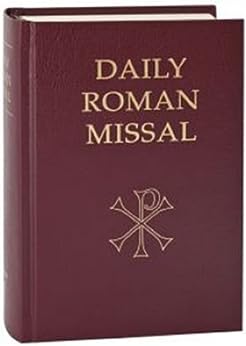 The Missal that I have is the Daily Roman Missal 3rd Edition.  You can purchase through the Catholic Company here: http://www.catholiccompany.com/daily-roman-missal-third-edition-p1111607/. You can shop around if desired. It has all readings of the Mass for all three years. It also has many prayers and devotions and other rich information on Catholic beliefs.

It’s quite the investment, though it is a book that you will use weekly (or more often if you go during the week) and will be reusable for many years.

One person is talking about “On Using Missals”